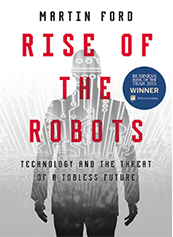 Rise of the Robots: Technology and the Threat of a Jobless Future

Martin Ford is a 25-year veteran computer design and software developer based in California’s Silicon Valley. His previously published book was The Lights in the Tunnel: Automation, Accelerating Technology, and the Economy of the Future (2009). Rise of the Robots has been a New York Times best-seller and won the 2015 Financial Times and McKinsey Business Book of the Year Award.

Over the past century and more, Ford argues, the growth of machines and technology have pretty reliably brought about increased productivity, job growth, and rising worker incomes — which, in turn, stimulated increased production to meet consumer demands. Masses of jobs moved from farms to factories and from factories to services. Technologies served as tools to increase the productivity of workers. But since the 1970s, and today more than ever, technology is not just a worker’s tool, it is replacing the worker himself/herself.

Ford abundantly illustrates this automation and robotics trend with examples from the auto industry (far fewer workers, far more robots on production lines), retail (online replacing brick and mortar), medicine and health care, and education. Recently (we could add), Amazon purchased Whole Foods and is pioneering self-serve stores. Driverless cars are in the news almost every day (so long taxi and delivery drivers, not to mention commuters and vacation travelers!). Today it is not just robots “manufacturing stuff” and doing the physical grunt work, however. It is artificial intelligence programs custom managing your investment portfolio and outperforming your brilliant investment manager at Charles Schwab or Vanguard or wherever. It is legal research going farther, deeper, faster than your hotshot attorney.

Examples can be multiplied in virtually all industries. And it is in all parts of the world. Robots will take over most of those jobs that were out-sourced and off-shored, and most of the remaining or recovered coal mining or farmworker jobs. Much of media “news” is already selected or written and distributed to social media consumers based on computer algorithms not on flesh-and-blood editorial team discretion as in the old newspaper days. You get the news and propaganda you have been “tracked” to indicate that you want. I saw a televised report recently about advances in perfecting life-size “sex dolls” so dating and marriage partners may soon be unnecessary!

So what kind of jobs are conceivable in the coming era where robots do nearly everything we now do? For a while anyway, there will be room for some “boutique” enterprises for grizzled holdouts like me who prefer imperfect cooks, wait-staff, and musical entertainment in neighborhood gathering places over technologically perfected industrial food prepared by robot chefs and delivered to the table by Stepford staff. Probably a few of us elderly will continue to prefer smaller, imperfect congregational life over multiscreen mega-pastor perfection while sipping Starbucks cappuccinos delivered to pews by usherbots in neat uniforms. OK, I’ll stop being cynical and grumpy now. But the boutique-hangers-on phenomenon is for real.

Maybe some aspects of personal and relational counseling will remain in demand. Maybe personal fitness trainers and Geek Squad-type technology-assistants will find employment. Human ingenuity is still incredible and many people will find or create new kinds of jobs. Even today in 2018, official unemployment figures are near record lows. On the downside it is possible that the irreducible and inexpugnable irrationality of humanity will revolt against the crushing rationalistic totalitarianism of technology. Various different black market economies could arise on the fringes of the Brave New World. A vast “unionization” of the people could leverage change among the wealthy elites.

Martin Ford’s most serious concern is with the concentration of wealth at the top, among the few corporate chieftains and oligarchs left standing and owning the robot economy, its tools, networks, and information capital. This wealth transfer to the top has been proceeding for several decades now and is only accelerating. People’s capacity to purchase things has historically been linked directly to a job and an associated salary. But if my job is taken over by a robot, how will I have the money to buy what that robot produces? If everything I could possibly do or think can be mimicked or surpassed by a robot, what could be left? Who would pay me if they could get a robot to do it more cheaply and better? That’s where we seem to be headed. Ford explores the concept of a minimum guaranteed income, something traditional conservatives considered (e.g., Milton Friedman in his Capitalism and Freedom) but which hardly seems possible in the era of tax cuts and the war on “entitlements.” Whatever it may be, there will need to be a new social contract addressing this problem of jobs and income.

The basic take on Ford’s book among reviewers is that it is well-researched and powerfully, convincingly argued. It is another wake-up call to be thoughtful about the future and try to plan ahead. The rise of the robots itself is all but inevitable. Our responses are not so inevitable; we still have some freedom to shape our fate.