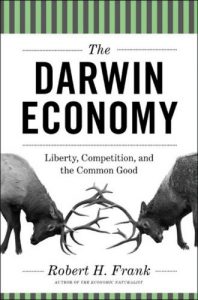 The Darwin Economy: Liberty, Competition, and the Common Good

Robert H. Frank is an economics professor at Cornell University’s Johnson Graduate School of Management. He is the author of three other popular books, author or co-author of two economics text books, and a regular “Economics View” columnist for The New York Times.

The premise of capitalism is that individuals, operating in their own best interests, are guided by “an invisible hand” to create value for the common good. But Frank makes the case that, even with perfect information and rules to assure competitiveness, the common good is not always served by individuals doing what is in their own best interests. One problem is that performance is graded on a curve. And a second follows from this: Without collective action, there may be a disadvantage to even doing what is in my own best interests because of the costs associated with making this choice.

One of his illustrations brings this home in a profound way. Evidence was gathered on the safety benefits of helmets for hockey players the National Hockey League. In spite of the research, individual players did not wear the helmets out of fear that they would lose a slight competitive advantage by wearing a one when others didn’t. But when put to a vote, the players voted overwhelmingly to adopt a rule requiring they be worn by all. This is the only way they could gain safety without losing competitive advantage.

Individual choice tends to move toward the relative advantage at the moment. This forces choices against the good of the individual, and against the common good. In this sense, capitalism operates more like Darwinian evolution, where individual choice for the survivor may work against the best interests of the species. The cover photo to two elk clashing over the right to pass on their genes to the next generation has led to elk with huge antlers. These same huge antlers work against the species making them vulnerable to prey as they pass through dense foliage.

Frank often draws on his work in behavioral economics to explain how people really make decisions rather than how they might make decisions if they were fully rational.

The book is delightfully written with many illustrations and thoughtful arguments. He takes on the libertarian position, not be disagreeing with libertarian assumptions, but by using those assumptions to show the breakdown of the common good. One particularly fascinating section is his libertarian argument for a progressive tax system (p. 126).

I doubt that the case Frank makes in this book will be ultimately persuasive to those who see the world through a different lens. But even those who disagree with him should enjoy the carefully crafted, fun, arguments, and the insightful illustrations. I highly recommend this book.