As the economic recovery continues, it seems that many of the indicators have improved, but the unemployment figures stay stubbornly high. Is the “jobless recovery” for real? It seems that this might be the case, with technology playing a significant role in the challenge. I don’t have a solid case to prove this, but will offer a few comments that might indicate lines of inquiry.

The Role of Capitalism

In the “good old days,” say 30 years ago, the system of capitalism seemed to work effectively to bring back jobs. The argument goes this way: Those who lead businesses are motivated to make even more money, so in an improved economy they will invest and grow their business. This means more jobs from that business and more money for the investors. Enlightened self interest at work.

This logic made sense for many years. But does it still hold?

The beauty of capitalism is the way it efficiently and effectively allocates resources. The business leader does not depend on a central planner, or any external master plan. By simply allocating resources efficiently in his or her own business, this will be good for that business and broadly good for the economy.

Two things have changed dramatically in the past 30 years: globalization and technology. Some would argue that these factors are not independent — the 21st century form of globalization is fundamentally rooted in technology. Technology enables the efficient coordination and movement of ideas and goods almost anywhere in the world.

In this environment, consider what might happen as the economy improves. The motivation to grow the business has not changed. But how to do that has changed. No longer is it simply a matter of adding more jobs to produce more goods and services thus increasing the size of the bottom line. Other potentially more attractive options are open to the business leader to grow the business. One would be to invest in an overseas plant, creating jobs in another part of the world while reducing jobs at home. A second would be to invest in technology enabling the more efficient production of goods and services also leading to a reduction of jobs at home. A third would be to buy a competitor, streamline the operations, and reduce a significant number of jobs.

There is nothing wrong with these investments — they make great sense according to the principles of capitalism. Further, most consumers, voting with their pocketbooks, endorse these ideas. When confronted with a purchase of two equally attractive shirts of similar quality, for example, most choose the one with the lower price. That is a vote for the business that introduces more efficient solutions leading to lower priced products. This is not big, bad business eliminating jobs, this is business responding to the demands of the market. And it is not a knock on capitalism — it represents capitalism doing what it does best.

Job growth was never what capitalism was about — it was a byproduct of the efficient allocation of resources and the self interest of growing the business. But perhaps the tight correlation between economic improvement and job creation is less than it used to be under capitalism in this technological era of globalization.

This thinking is reflected in two of the past Conversations in Ethix. Prabhu Guptara, then an executive with UBS in Switzerland, raised the issue this way in our 2004 Conversation:

“Another challenge comes from technology itself. There will likely be more and more skilled joblessness as technology provides efficiencies in work. Some jobs are capable of being expanded, involving services and new ideas. But even as these grow, technology eats up a middle range of jobs that require a modicum of intelligence and a certain amount of training. So today, you have to be faster and more intelligent than a computer, or intelligent in different ways than a computer, in order to retain your job. Fewer jobs will be needed because more jobs will get automated away.

“As we move into a globalized world, it is theoretically possible to have a single factory located in Brazil or China or Africa or wherever producing, for example, all the razor blades we need in the world. And completely automated! Needing not a single human being in the factory! Now you can apply this to the whole range of products … and if we can produce all the products we need in a single, robotized-factory basis (this is pushing the argument quite far, I know), then all that we need are: logistics, creativity to be able to come up with new products, and people who’ll devise computer-based methods of selling these products to everybody who can buy. But of course the problem is, if we don’t need to employ people, where do potential customers get their income?”

Guy Kawasaki, acclaimed entrepreneur, said in our Conversation in 2010,

“The purpose of a company is not to create jobs ….

The Organization for Economic Cooperation and Development (OECD) has produced a report from its Directorate for Science, Technology, and Industry that identifies some similar themes. Here is a short quote from the abstract of this report:

“OECD economies are simultaneously experiencing a wave of technological change, intensified international interdependence, and social cohesion problems caused by prolonged unemployment or stagnant wages and incomes in parts of the population. Technology is increasingly seen as the main source of long-term growth. It is a major force for the transformation of economies, for growth in productivity, as well as for the creation of jobs and an enhanced quality of life. It is also the fundamental driving force behind globalization, which represents a huge potential for gains from intensified exchange, specialization and learning across countries. At the same time, technology is widely blamed for the destruction of jobs ….

“The perception of what governments can and should do in respect to technology is changing, however. This is a consequence of a better understanding of innovation processes and the increasing importance of technology diffusion, as well as of the new economic conditions resulting from globalization, regulatory reform and budgetary constraints. So far, reforms of existing policies in the technology field have been limited, however.” 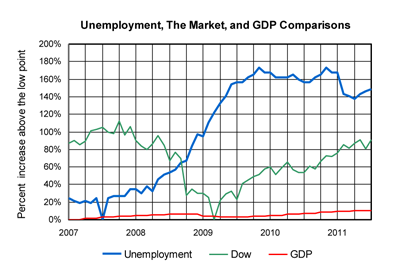 What we see in the chart is unemployment beginning to rise in late 2007, reaching a peak two-and-a-half years later and dropping only minimally. Meanwhile the Dow dropped precipitously from its October 2007 peak to its low in March 2009 but has regained most of its losses by the current time. The GDP slowed its growth and actually dropped in 2008 before returning to modest growth.

What Does This Mean?

It is true that there are often lags in hiring after economic downturns. But it is clear that companies of the DOW, at least, recovered economically without strong hiring. If it is indeed the case that job growth does not follow from economic growth and investment, at least as much as it used to, it should cause us to reconsider several planning assumptions that underlie policy. To increase job availability, more attention needs to be paid to nurturing the development of small businesses, since large business investment may or may not develop jobs. Those who advocate not raising taxes for big business and high net-worth individuals because it would stifle job creation may need to find another rationale.

Some would address the issue of job growth by seeking to limit globalization or efficiencies from technology. This, too, would be a mistake. The impact of such actions on competitiveness in an increasingly integrated world would be worse than the lack of local job creation.

Job growth is important for a flourishing society, and it will take some new, creative approaches to make this happen in the face of global, technologically based capitalism.

Al Erisman is executive editor of Ethix, which he co-founded in 1998. He spent 32 years at The Boeing Company, the last 11 as director of technology. He was selected as a senior technical fellow of The Boeing Company in 1990, and received his Ph.D. in applied mathematics from Iowa State University.

1 The data for this graph was derived from data provided by the Bureau of Labor Statistics (unemployment data), the Bureau of Economic Analysis (quarterly GDP data), and the Dow Jones Averages using data from the first week of each month. The vertical axis for the graph represents the percent of increase from the low point during the period. The high point for the Dow was slightly more than a 100 percent increase compared with the low, while the high point for unemployment was about 180 percent above the low.

4 thoughts on “The Role of Technology in a Jobless Recovery”