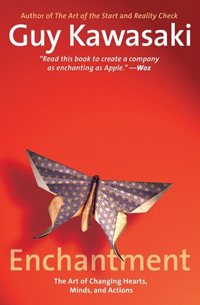 Enchantment: The Art of Changing Hearts, Minds, and Actions

Guy Kawasaki is a founding partner of Garage Technology Ventures, co-founder of Alltop.com, and the former Apple evangelist. This is his 10th book.

The fundamentals of business — great products, strategy, marketing, and financial acumen — are indeed important, but they are not enough to make a great business. The magic ingredient is “enchantment,” according to Kawasaki. Enchantment affects employees, customers, investors, and everyone who comes in contact with the business. It marks the business with that “something special” that distinguishes it from the competition. He puts it this way in the opening chapter:

“The world will not beat a path to your door for an insanely great mousetrap. In fact, the greater the mousetrap, the more difficult it is to get people to embrace it because it is so different from what people are used to.”

He then builds the case chapter by chapter in a style that only Kawasaki can pull off. For anyone else, saying the things he says might be considered flippant or self-centered. But when he says them, they are insightful, profound, and genuinely fun.

He discusses attracting capital to your business through enchanting presentations (never more than 10 slides, never less than 30-point font). He talks about “meet and greet” including the proper handshake, appropriate dress, and even the appropriate use of swearing.

He is very focused on empowering others, particularly service people dealing with customers. “They care a lot,” he says. Then he adds,

“Money is not their sole motivation. The satisfaction of taking care of customers and making them happy is important, too. The bummer is that organizations don’t let their employees do this. Unwittingly, they prevent employees from doing their best for the customers with policies that are written to prevent losses, not achieve gains,” p. 153.

Enchantment is also applied to relationships with the boss, employees, customers, and potential customers.

This is a terrific, enjoyable, and important book. It would be great for the entrepreneur. It would also be helpful to almost anyone in business. And those in nonbusiness organizations would find enough applicable chapters to make this worth the purchase price. I highly recommend this book.

Safe Patients, Smart Hospitals: How One Doctor’s Checklist Can Help Us Change Health Care from the Inside Out

Peter Pronovost is a professor at the Johns Hopkins School of Medicine in the departments of Anesthesiology, Critical Care Medicine, and Surgery, Health Policy, and Management. He was named on of Time Magazine’s “100 most influential people” in 2008, and received the MacArthur “genius grant” in 2009. Eric Vohr teaches technical writing at Johns Hopkins University, and has been a contributor to many magazines.

Pronovost was inspired by the tragic death of a child under the care of physicians at Johns Hopkins Hospital. “What really killed Josie was an archaic culture that disabled the care team so they did not recognize and act on the obvious signs that Josie was dehydrated,” p. xx. Drawn into the issue through conversations with the child’s mother, Pronovost began a relentless pursuit of the causes of hospital safety problems and the need to identify new approaches.

This book is his story of a process that started in one part of the hospital (dealing with reducing infections from post-operative surgery) and then spread to many other areas of the hospital. It started at Johns Hopkins and then spread to hospital systems across the state of Michigan. It began with that first talk and has spread to congressional testimony and a campaign across the country and around the world.

The book is simultaneously inspiring about what could be done, and a bit frightening as to what is so often done instead. It shows what the determined, focused efforts of an individual can do to make a difference that is literally life or death.

I admit to having some reservations about the book as well. This is not the first book I have read on the subject of hospital safety. Other work by Atul Gawande, Bob Wachter, and Gary Kaplan, for example, offers complementary insight, which taken together, could start a revolution. These doctors and authors make reference to Provonovost’s work, and Gawande even endorsed this book. Yet Pronovost did not mention any other work of these hospital safety leaders, as if he were the lone pioneer. Gawande’s presentation of the checklist case is clearer, in my view, showing the trial-and-error process of getting the checklist right. In a similar way, Pronovost offers little insight on how to approach the hospital safety problem, seemingly reacting to particular issues rather than identifying a step-by-step process for addressing the many issues that are a part of the hospital safety problem.

Had this been my first book on the subject, these criticisms would not have been so obvious. But as one colleague said, perhaps the criticisms are simply a reflection of the early stages of this movement. As it gains more maturity, it will become more integrated with its many contributors. Nothing said here should detract from the good work that Pronovost has done.

This book offers significant insight and inspiration. Those in health care will benefit greatly from it, as will those needing health care! And those in other business areas could also gain insight for their own work.

“The Cost Conundrum: What a Texas town can teach us about health care” by Atul Gawande. The New Yorker, June 1, 2009.

A surgeon and a writer, Atul Gawande is a staff member of Brigham and Women’s Hospital, the Dana Farber Cancer Institute (both in Boston), and The New Yorker magazine.

McAllen, Texas, is in Hidalgo County, which had the lowest household income in the country in 2006. But this is not what attracted Gawande’s attention. Rather, it also had the second highest per capita health care expenditure. In 2006, Medicare spent $15,000 per enrollee in McAllen, while the average income per person was $12,000. This compares with Grand Junction, Colorado, where the average expenditure per Medicare enrollee was about $5,000, as well as El Paso, Texas, where lifestyles were similar but health care costs were much less. Only Miami, Florida, had a higher expenditure, and it is much more wealthy. Gawande wanted to know what was going on, and this article reads like a detective story as he searches for answers.

The doctors in McAllen assumed that they were offering better treatment, but the outcomes did not bear this out. Gawande looked for environmental factors — higher levels of smoking or obesity in McAllen than in other places. Again, a dead end. If anything, the smoking rates were lower in McAllen than in El Paso or Grand Junction, leading to a lower incidence of cardiovascular disease.

Ultimately, Gawande found the distinguishing feature in McAllen’s health care was their economic approach to health care. Doctors in McAllen were on the “extreme end” of the spectrum where financial decisions drove the mixture of the care and the practice of care.

I highly recommend this article. It is readable, thoughtful, and explores surprising aspects of the health care challenge. It was undoubtedly a factor in the 2010 health care legislation.