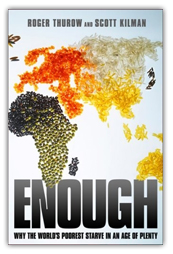 Enough: Why the World’s Poorest Starve in an Age of Plenty

Roger Thurow was a Wall Street Journal (WSJ) foreign correspondent for 30 years, and reported from more than 60 countries, including two dozen in Africa. In January 2010, he joined the Chicago Council on Global Affairs as senior fellow on agriculture and food policy. Scott Kilman has covered agriculture for the WSJ for 20 years.

The Green Revolution and the work of its founder, Nobel Prize winner Norman Borlaug, began in the 1940s and showed the way to move the world out of hunger. But after some promising start to addressing the problem of world hunger, there has been a significant relapse. The authors offer this premise:

“…the world has known how to end famine and tame chronic hunger. We have the information and the tools. But we haven’t done it. We explored the heavens. We wired the world for the Internet … . Yet somehow we haven’t eliminated the most primitive scourge of all… . By 2008, the number of undernourished people in the world had swelled to nearly one billion, the largest number since the early 1970s,” p. xiii.

The book begins with a historical look at Borlaug, and some of the early work to end hunger forever. Unfortunately, after some early success, there were significant setbacks over the past 40 years. With this foundation, the authors set out to understand the factors that have led us to the current situation. Through their research and personal interviews, they uncover a collection of interdependent causes leading us to the current state, and unfortunately the blame is widely distributed:

An extensive proposal for addressing the issues is presented at the end of the book.

The authors do a good job of balancing the data to support their statements with personal stories that put flesh on them. They show the unintended consequences of well-intentioned activities that ultimately contribute to the problem they were put in place to solve. The primary weakness is what seems to be a bit of naïveté in the proposed solution. For example, their challenge to end farm subsidies in countries where agriculture has modernized may sound reasonable, but no political leader in recent history has been able to stand up to the farm lobby. How, practically, might this change?

This book is a must read for anyone who cares about world hunger. 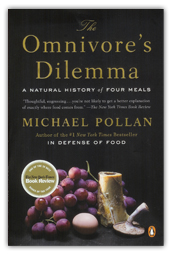 The Omnivore’s Dilemma: A Natural History of Four Meals

Michael Pollan is the Knight professor of journalism at the University of California-Berkeley, and a contributing writer to The New York Times Magazine. He is the author of three previous books and has written another since this one.

Most of us don’t know where our food really comes from, or what its journey is from start to finish. No, it’s not from the grocery store or McDonalds! Michael Pollan wanted to understand the food system and looks at three broad categories of food creation in the 21st century in the United States.

He starts with the world of industrial food production. Corn is the big product in agriculture because the farmers are driven by the needs of the industrial food complex headed by such giants as Cargill and Monsanto. Through their work, corn has found its way into a large percentage of foods available, and the industry is creating new uses for corn all of the time. Through repeated processing, each atom of corn is put to use. And at the end of the line we find corn in almost all fast food.

We find it in the raising of industrialized chickens, pigs, and cattle as well, where the efficiency model is king. This leads to quick growth in unsanitary cattle feedlots, chickens that never have the space to walk, and lots of use of antibiotics to fight off disease. He does not paint a pretty picture nor hide his disdain.

His second picture is of organic food. But he divides this group in two pieces: free-range organic with rotated crops and sales in a local region; and industrial organic, where every process meets the minimum specs for organic but industrial processes and long shipping paths are not much different from industrial-food production.

His final picture is gathering food in the wild. Searching for mushrooms and grasses, hunting for meat, picking wild berries, and the like take us back before organized agriculture. He favors the local organic or searching processes for food, arguing that the food is healthier, the animals and soil are better treated, and the process is more sustainable.

The book opens a new world for many people, and is often beautifully written.

But the downsides of the book dominated for me. Too often it is ponderous, taking several pages to say would could be said in a paragraph. It is filled with ironies that seem to be missed by the author, and here is one example. An organic farmer refused to ship one of his famous organic chickens to the author because of the carbon footprint, so the author flew across the country, rented a car, and made the purchase that way. His discussion of the economics of farming made me wonder if he understood economics.

Further, the author has a strong point of view and generally does not make the attempt I would expect of a journalist to get the other side. Getting the story on the ethics of eating meat from Peter Singer (who says a healthy cat has more value than a sick child) without talking with another ethicist was strange indeed.

Those interested in the food industry should read this book to understand one of the perspectives that is out there. But I think it should be read as a narrow piece, offering one point of view with no attempt at an objective point of view. Don’t miss the flashes of insight, even brilliance, but don’t let these blind you to what is missing as well. 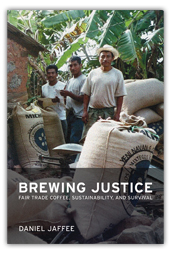 Daniel Jaffee is now an assistant professor of sociology at Washington State University, where he teaches on international, sustainability, and development issues. This book won the C. Wright Mills Award for 2007.

As one or two philosophers are fond of saying, there’s only one reason to believe something: because it’s true. This principle undergirds an excellent book by the sociologist Daniel Jaffee, Brewing Justice. Plenty of us may be inclined to buy fair-trade coffee when it’s easily available, or (if we’re really motivated) to seek it out even when it’s not. We have heard that fair-trade coffee benefits the farmers who grow the beans, and that sounds like a good idea.
But Jaffee isn’t content merely to learn whether advocates think the rhetoric sounds right, the theories seem fresh, and the goals are desirable. He knows all that. The question is, Does it really work? To get at a measurable answer to that question, he took himself to Mexico and dug deep into the economics, ecology, and culture of the coffee trade. His book is strongest because, while he doesn’t disown his advocacy, he has been unsatisfied with advocacy unsupported by research.

And how many dimensions of research are needed to show the details of this complex landscape. From one point of view, Brewing Justice is a case study of capitalism, a close examination of how markets both are and aren’t free. But “case study” is too small a word when we’re talking about a global commodity of such magnitude, the United States’ “single most valuable food import” (p. 16). Nor is it quite the right word where we find extensive (though thankfully lucid) sections on the theories of Karl Polanyi and the nature of neoliberal economics. He’s hardly an ideologue on economic topics, and he’s comfortable admitting the paradox that is market capitalism: blessing to the coffee farmer — and curse.

From another point of view, Brewing Justice is a primer in the ecology and agronomy of coffee farming. Jaffee himself lived in the Mexican highlands for years, recognizing that he needed to learn exactly how coffee is farmed if he had any hope to understand whether fair-trade practices are improving the situation of the farmers. Standing in the coffee aisle at the supermarket, the world of the coffee grower is pretty far away — but less so after reading this book. Here you may learn more than you thought possible about how a family cultivates its coffee trees, what other crops they grow, and especially about how much work the rigorous international certifications for fair-trade and organic coffee bring to the farmers. The “coffee gardens” that produce most of the world’s beans sometimes sound positively Edenic, but you’ll see how many thorns and thistles, how much sweat of the brow are found there, too.

Ultimately, Jaffee is a sociologist, an ethnographer, and an anthropologist, a people-person. Despite the swaths of business and economics (yes, both) in this book, despite all the agriculture here, the most compelling sections involve narrative passages of almost novelistic detail. With Jaffee, we shadow a “coyote,” a coffee middleman, to understand not just his function in the market chain but also something of his life. Jaffee takes us into the dirt-floored homes of farmers and conveys to us their pride in a hard-won and carefully guarded organic certification, the many ways they feel the belonging of a fair-trade cooperative. The book may have 41 numbered statistical tables, arrayed with a statistician’s discipline, but it has at least that many names and faces, characters we really get to know, too.

Fortunately, Jaffee keeps his eye on essentials. He’s got big questions about how food is grown, what it means to do business, what colonialism looks like these days, and about poverty. And as you can tell from the title, justice remains his central concern. Does fair trade make coffee growers’ lives better? (He assumes we should want it to.) If you want to walk through the richly detailed answer in full — from Brussels to Oaxaca — read the whole book. But Jaffee’s short answer is this: Yes. Fair trade makes a demonstrable, positive impact on coffee farmers’ lives, livelihoods, natural environment, social stability, and food security, but not as much as it could. You can be confident, though, that the small additional cost of fair-trade coffee isn’t going to bankrupt you and that it really does make a difference in the mountainside villages where sweat and tears are shed for that delicious cup of joe.