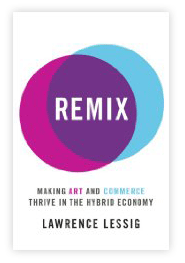 Remix: Making Art and Commerce Thrive in the Hybrid Economy

Lawrence Lessig is professor of law at Stanford Law School and founder of the school’s Center for Internet and Society. He is author of four other books and a columnist for Wired.

Technology creates changes that make otherwise reasonable laws seem absurd. An example of this came early in the 20th century when the law said that land ownership extended both below the land and above it. This law needed to change when airplanes came into common use. Without such a change, a commercial airline would need to get approval from all of the land owners below its flight pattern. It took a U.S. Supreme Court case to establish this.

Now technology has made it possible to create new art forms from music and videos, enabling people to move from passive viewers to active creators of new art. But the law protects the intellectual property rights of video and music, making such new art forms illegal.

In this sense, the law is different from print law, where it is perfectly legal to quote from a book or article, with a reference, without gaining prior permission to do so. Such is not the case with video and music, and Lessig wants to see some changes in the way this law is interpreted. He is not dismissing the protection of intellectual property rights, but calling for a more consistent modification of such rights.

In this highly readable, even entertaining account, Lessig lays out his primary case. As a subtext, he surveys ways that technology and the law collide, providing thought-provoking insight into the transformation of society through technology. The 20-minute version of this book is available through a TED lecture by the same author. This is a very thoughtful book. 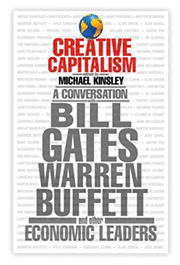 Creative Capitalism: A Conversation with Bill Gates, Warren Buffett, and Other Economic Leaders

Michael Kinsley is a columnist for Time, past editor of the New Republic and Harper’s, American editor of the Economist, and founding editor of Slate. He has written or edited four other books.

Bill Gates gave a speech titled “A New Approach to Capitalism” to the Davos World Economic Forum in January 2008. In this presentation, he argued that that capitalism had done a very good job of creating opportunity for many of the people in the world. However, some people in the world have no access to the global economy because of extreme poverty. We need to harness the power of markets to address the needs of this group, and to do so would require some changes in the capitalistic system and its incentives resulting in “creative capitalism.” He argues that there are two great tendencies for humankind: self interest and caring for others. Capitalism captures the first, but Gates argues for a version of capitalism that would capture the second as well.

Kinsey did two things with this speech in creating his book. First, he met with Bill Gates and Warren Buffett, capturing their dialogue about creative capitalism. Then he posted the speech and the dialogue on a blog’s site, and drew comments and responses from economists (including two Nobel Prize winners), government officials, and senior journalists. Their postings are packaged in this book as an open-ended response to Gates and others. Incidentally, Kinsley used old-fashioned capitalism to create the book: Writers were paid proportionately according to the size of their contribution.

This collection of comments is both fascinating and frustrating. Many of the critics seemed to completely miss Gate’s point in two ways. It appears most had never met a person in extreme poverty, or they had no ability to deal with the nuance of the ideas Gates proposed.
Gates’ proposal is worthy of more serious thought than most of the responders gave it. Perhaps that serious thought will benefit from seeing the arguments raised by the responders. I hope this book will start a bigger, more important discussion.