He was right. The details do matter when making a technology decision. And he was also right that most managers don’t want to bother with the important details. To illustrate this point, I will look at a specific problem hospital executives face with technology. While this example comes from a hospital setting, the principles involved in making a technology decision apply much more broadly.

Hospital executives are caught in the crossfire of reducing costs and improving care. Technology is often a tool that can help to improve patient care. Yet technology adds cost not just in the initial purchase, but in the maintenance and support. This dilemma is not easily resolved. Complicating the picture are the technology advocates of many stripes claiming that their solution, and theirs alone, will solve the executive’s problem. Further complicating the picture is the desire of many hospital executives to cover the cost of technology by reducing people, often reducing the time medical people spend with the patient, which is critical for care.

Mark Neuenschwander, another friend and hospital automation consultant (www.hospitalrx.com), said that there are 500,000 preventable adverse drug events every year in the U.S. hospitals, with 7,000 of them resulting in death. So one place where technology could help improve patient care is in the area of assuring that the drugs ordered by doctors are actually the drugs administered — in the proper dosage and at the right time — to the right patients. Presumably, information technology would be very good at matching patient information (identity, illness, allergies, other drugs taken) with pharmacy information (appropriate drug, adverse reactions, proper dosage, and timing) with nursing information (retrieval and administration of drugs, along with documentation of what was given). Neuenschwander describes the process in the diagram below. 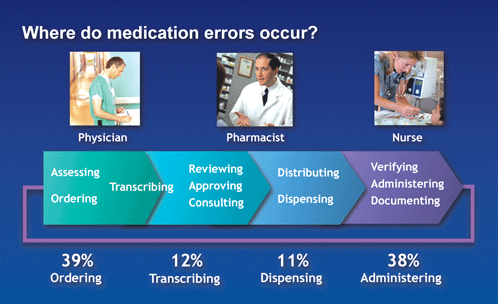 There are many opportunities for errors in the process. Information on the right drug order must get from the doctor to the pharmacist. Physician handwriting is a legendary issue. So is the similarity between names of prescription drugs as these examples show:

Once the order is transmitted, pharmacists as medication experts check for allergies, drug and food interactions, etc., then see that the orders are correctly filled and delivered to the care areas. Nurses are responsible for retrieving the medications, administering them to the patients, and documenting what was done.

Studies have been done to determine where the errors occur in this process, and the results are also shown in the diagram. More than half the errors occur in the ordering and transcribing portion of the process. This observation is substantiated by the Journal of the American Medical Association, which reports “Hospital computerized physician order entry (CPOE) systems are widely regarded as the technical solution to medication ordering errors, the largest identified source of preventable hospital medical error.”

So it would seem that the next step is obvious. Hospitals should move forward in implementing CPOE. CPOE systems often incorporate features to automate the checking of adverse drug interactions, and can deliver the precise prescription directly to the pharmacist.

“Not so fast,” says Neuenschwander. “There are several problems in pushing forward with this obvious technology-based solution, even though it is being pushed by the vendors and the American Medical Association.”

The first is that it is expensive. Until recently, no overall system plan existed, so hospitals that pushed for CPOE found themselves with solutions that were not compatible with their pharmacy information and dispensing systems. As the total solution started coming together, those who started early often had to do very expensive restarts. It was like starting to build a house before the architect had finished the design — stairs and doorways went to nowhere, and a great deal of rework was necessary. Each time technology is adopted for a portion of the problem, the question needs to be asked, could we be locked in to a dead end?

A second caution, according to Neuenschwander, is that CPOE solutions today are cumbersome to use, so physicians often use only a portion of the system. “The fact is, not everybody uses them as well as they should, and in some instances the resulting use is actually less safe.”

Thirdly, the rules for automating the decisions regarding possible adverse drug interactions, allergies in the patient, etc., are complicated. When this is automated, there is the danger that some subtly is missed, and with automation there may be no person to check for reasonableness.

Looking at the Data

Finally, in spite of the appearance from the data, this may not be the “lowest hanging fruit” for reducing patient harm and death. Neuenschwander noted a problem with statistics by quoting humorist Aron Levinson: “Statistics are like bikinis. What they reveal is suggestive, what they conceal is vital.” What is concealed is in the next diagram. 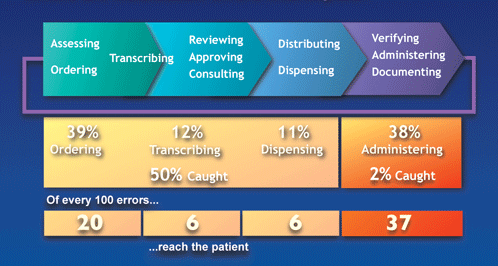 While it is true that more than half of the errors come in the stages of ordering and transcribing drugs, fully half of these errors are caught by pharmacists and nurses before they reach patients. On the other hand, those errors at the actual point of care are not able to be further reviewed.

This argument would suggest that health care should focus on the other end of the process. The best next technology for most hospitals to apply, Neuenschwander suggests, is bar coding at the point of care (BPOC). A nurse uses a scanner to read the bar codes on a patient’s wristband, which brings up the patient’s name and drugs due. Then the drug labels are scanned, and instructions are indicated for the patient or an error is indicated. As drugs are administered, documentation occurs automatically.

A complaint from some nurses in BPOC trials was that it took longer to go through this process. However, when added to the documentation time, the overall time was less, and all of this time was with the patient. This process has been implemented in Veterans Administration hospitals across the United States. An interview with 10,000 nurses there indicated that not one of them would want to go back.

A bonus to this approach is that BPOC is still compatible with an overall automated solution including CPOE. But as a next step it produces the greatest reduction in patient deaths at a fraction of the cost of implementing CPOE.

This leads Neuenschwander to three other conclusions about hospital automation:

There is something every executive can learn from this narrowly defined automation scenario in a hospital. Going back to my friend’s question in the beginning, we see from this example that the details do indeed matter. Understanding the vision matters. Balancing costs and benefits matters. Getting the statistics right matters.

So what should executives faced with a technology decision do? They should have access to people who know both the business problem and the technology opportunities. They should talk with vendors to understand possibilities, but not to simply buy their solutions.

I asked my technology friend what he is doing about his side of the equation, and he told me he is working at night on an M.B.A. His doctorate in physics is only part of what he needs. Great choice!

Al Erisman is executive editor of Ethix, which he co-founded in 1998.
He spent 32 years at The Boeing Company, the last 11 as director of technology.
He was selected as a senior technical fellow of The Boeing Company in 1990,
and received his Ph.D. in applied mathematics from Iowa State University.